Go on ask me what I have been doing.

Well, seeing as you asked….. Rather a lot as it happens. First of all we, that is Bryan and I, in the role of PARENTS, picked up our lovely special first born Pip from the Airport and threw him headlong into the Emirates Airline Festival Of Literature. There is nothing quite like hitting the ground running when you have moved half way across the world. Well, that was our experience and we decided to impose this philosophy on our son. I let Philip rest for a few hours (I am not a monster after all) and then dragged him out.

Pip and I found our way down to the DSCA Theatre in Al Mamza on Tuesday 4th March in the afternoon to the lovely ( but underutilised -if you ask me) venue for the Opening Ceremony of the Lit Fest.  The centre is beautiful in the Arabic Style and you get a lovely view of the beach which you can enjoy from the outdoor seating at the small friendly coffee shop.

I manned a theater door and Philip corralled busses with children in them for a bit and then we watched the “show”. Riz Khan was a delightful host allowing us to look in on his chats with various literary notables. I especially enjoyed listening to Pam Ayres reciting her poems. She has a delightful intimate manner. Here is a bit of Pam Ayres if you need reminding http://www.pamayres.com/index.php/category/poems/ you can read a few of her poems or listen to her recite them. I recommend listening.
Sadly I did not get much of a chance to listen to the whole of any one other authors chat as I was being a lioness and guarding the outside of the door from marauding heaven knows what, such was my unsolicited attention to duty.  Bryan managed to fight his way through the rush hour Sharjah traffic to get to the ceremony in time to hear who he wanted to - I think it was Jeremy Paxman.
All in all we (Bryan, Pip, and I) had a lovely evening that turned out to be a good kick off to the festival. We went home together feeling all warm and fuzzy after being in the same place at the same time for the first time in a long while.
On Wednesday “my room -Al Bahara II” (please infuse your reading with a possessive tone) was not in use so Philip (who was one of my assistant room managers) and I were free. We went down to the festival so that Pip could get orientated before he was fed to the literary masses of Dubai, so to speak. The Festival was awash with school children of all ages. So much excitement that the air was buzzing with it. There is nothing quite like a bunch of  tweenie reading groupies

Thursday 6th March had us checking into the volunteers’ registration area where we got cosy with fondly remembered volunteers from last year and befriended new volunteers. We sat in on our first Room Managers Morning Brief and launched into our busy next few days.

I really enjoyed the female focus events that were held in our room. I loved listening to the “re-shaping your life discussion”. It was heartening to see that there were a handful of successful women out there that had changed careers (well lives really) more than once. There is hope for me. My heart sang at me. Well there is none at all actually unless I get up off my bottom and do something about it but that is hardly the point……
Sarah McIntyre was just the most fabulous person I came across in the festival. Her outrageous hats and outfits were marvelous. She wore a towering creation at the Opening Ceremony that could not fail but catch ones attention. She continued to be the life and  creative soul of the festival with her "constum-esque" dresses and hats.  Here is a selection of what she wore. Please remember that I have stolen most of these pictures from various places on the WWW and most of the photos are not actually from the EAFOL. But they are what she wore at the EAFOL. 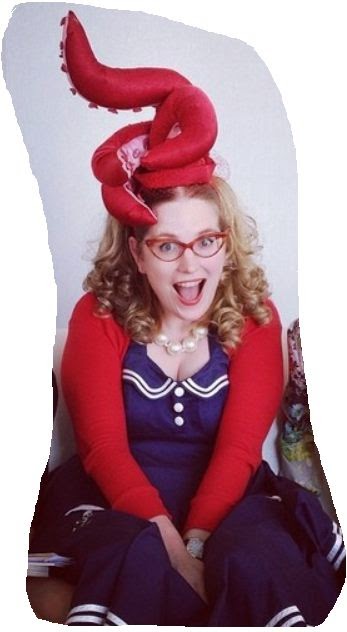 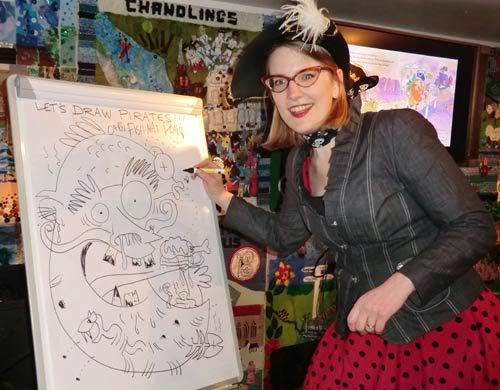 I even managed to get one of the drawings that Sarah drew (unsigned) and then lost it when my clip board disappeared in the ops room under a pile of all the paperwork. I was going to put it up in The Old Library. I am just a little disappointed about that. Oh well.
On Saturday we had another event with Sarah McIntyre this time with Philip Reeve. Never, ever, have I wanted to be five years old again as much as I did then. The co-authors performed “Oliver and the Seawigs” entrancing and delighting their young (and  new old) fans. 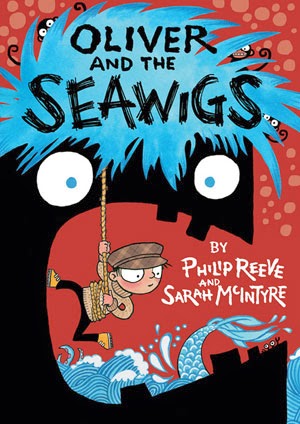 At the end of the evening I donned headphones for an interesting discussion on Emirati Satirical fiction. It was not long into the session when “fiction” became “commentary” and a lively discussion ensued. Khalid Al Suwedi was a charming and warm speaker with a cheeky twinkle in his eye.

Friday 7th March kicked off with a fascinating teaser from Prue Leith about her recently published memoire Relish. Her account of putting herself out there on the dating scene as single woman in her 60’s was delightfully candid. I loved the hints at her growning up in South Africa. I will be getting that book out to read now that I have listened to her talk.
The Big Hit of the Day in our room was Professor Jim Al-Khalili and his talk about The Golden Age of Arabic Science. The audience and volunteers alike (me in particular as I am in total awe of Physicists who can for a nano second make you think that you 'get" what they actually do) loved his engaging talk on the Golden Age of Arabic Science -not to be confused with Islamic Science, by the way. I felt so bad for Bryan as he was in Oman (or somewhere) so could not be at the festival on Friday and missed this. Fortunately he did not miss the Saturday discussion where Prof. Jim discussed his big idea - he talked about Free will – are we slaves to the molecules that make up the machinery of a person and his thoughts, or are we the masters of our will. Bryan managed to squeeze in a question and asked his thoughts on how this  colours thinking on crime and punishment. Jim Al Khalili is an engaging, passionate speaker who clearly loves what he does. Which I think, is think, A LOT. Of course I will be getting his book. 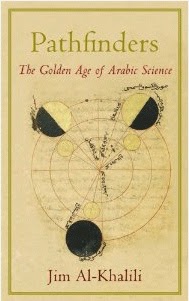 This book fair is proving to be a tad expensive.  I will check first and see if we have the books in the library……..
Orlando Figes talk on love letters sent and received  from the Pechora labor camp in Siberia between two lovers  covering 1946 to 1955 was fascinating and indepth. This is an amazing tale of enduring love and of making a plan to make the impossible happen. Go on get the book you will love it.
Ali Alsaloom of Ask Ali fame (in Dubai) was another delightful surprise. He told the sweetest story about his Grandmother and the pearls that she never had. This was a simple story that told the audience a bit about the history of pearl diving in the UAE from a uniquely personal perspective. Ali invited us to visit his pearl beds in Abu Dhabi’s crystal clear azure waters.

I found Georgina Howells presentation about Gertrude Ball a touch dry in delivery and I much preferred the question and answer session at the end of the session where I felt she warmed to the audience more. I enjoyed that there were differences of opinion about the character and motivation of Gertrude Bell from the floor. There is no doubt however, that Gertrude Bell was a formidable and fascinating woman who influenced the decisions made about the Middle East at a crucial time in its history. This is another book that I will read. 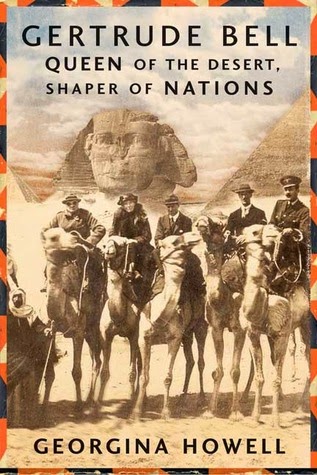 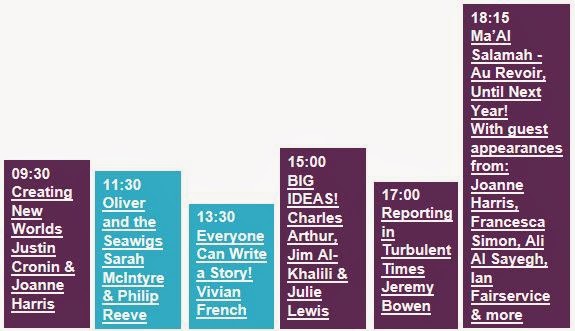 By Saturday 8th March We was ready for whatever was thrown at us. We surged into our first session looking forward to a great day’s literary fodder.


My favorite quote for the Festival came from Justin Cronin on Saturday. When asked how long a short story should be he answered (short version here) that a short story should be as long as the readers’ bladder holds out before the reader need to go to the loo…….
Vivian French is an amazing teacher! She was brilliant with the children in her session.  I think that an adult writer could have taken away some pointers on how to write just as the children did. Every recommendation given by her young audience was used in her story board. It was quite fascinating to see how she built up her story. Well actually the story belonged to everyone in the room who gave a suggestion. She was inspiring. If someone as creative as Vivian tells you that you can write a story you jolly well believe her!

Another favourite with the public was Jeremy Bowen talking about reporting in turbulent times. He gave an intimate account of how his career impacted on his personal life and mental health. We were treated to a touching conversation that was peppered with snippets of recollections of a life lived fully in the service of honest reporting.
At this point in my post, if any of you are thinking “Oooo I might do this next year”, could I encourage you to pick a couple of sessions that you absolutely would never, ever have thought to do? If I can take away one thing from this festival as a result of being in a redetermined room for the whole event which means that I do not get to choose what I saw, it is that I what Ienjoyed the most was some of the sessions that I would not have chosen to see if I had been given the choice. Don’t go for the obvious. Have no interest in children's authors? Go and see one in action. It will warm your heart. Not interested in Vampires? Sit in on a session about them. You will surprise yourself.


Count me in for next year and I hope to see you all there.
Here is what The Bookseller had to say about the EAFOL