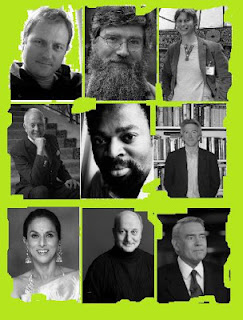 From 4th to the  8th of March Dubai was host to the 5th Emirates Airlines festival of Literature . The event is always a wonderful think fest and creative thought breeding ground for readers, literary types and anyone interested in current affairs. I always feel as if I have been given a very special treat by being there  and having the opportunity to listen to clever, eloquent, people talking passionately about things they know lots about. This year was even better for me.  I have been to a couple of years’ worth of Festivals but this was the first time I was a volunteer and this meant that I got to rub shoulders, ever so briefly, with a myriad of authors and media personalities from all over the globe. IT WAS HEAVENLY.


The best thing for me ,as a volunteer, as it turned out, was getting to see sessions that I would never have chosen to see because they were happening in the room I was assigned to help look after. I feel enormously privileged that I got to see some of the children’s authors. I am so looking forward to telling the children that come into the library all about what a sweet shy man Nick Arnold ( Horrible Science series) is when he is off stage and what a delightful inspiring science teacher he was on stage. Giles Andreae ,  who wrote “Giraffes Can’t Dance” and “Rumble in the Jungle”  but who is probably better known to you as the creator of Purple Ronnie and  Edward Monkton was a delight and interacted so kindly with his audience, young and old alike. Philip Ardagh creator of the Eddie Dickens series of books, was charming. At the opening ceremony when asked why he was so tall by a young fan ( he cuts a rather distinctive figure towering over the rest of us) he responded by saying that if he were any shorter his beard ( quirkily long and thick) would brush the floor. A couple of nights later he was entertaining a very adult audience at “The Lighter Side - Tales from a Writer’s Life” dinner event with lively, witty, grown up banter. 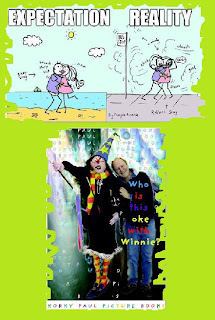 I discovered that the illustrator of “Winnie the Witch” Korky Paul was originally from Zimbabwe and  Rosie Goldsmith who was one of the International Moderators spent a couple of years there in her childhood. Now you may be wondering why I am making links back to my homeland, well, that is a little short story that fell into my Festival Experience. Let me take you back to over 35 years ago to Mabelreign Girls High school to form 1A2 where I happened to be in the same class, as a girl called Sonia Sime. We had a sewing teacher that used to trill “Sonia Sime and Penny Panas your names sound like bells.” I cannot speak for Sonia but I hated that. Flash forward to a few days ago. I was sitting outside in the lovely spring weather overlooking the creek, passing the time with a library chum and then having a quick bite to eat with Bryan before we went to listen to a discussion called “the English Language: Hero or Villain”. This, by the way, was brilliant, and too short. Anyway I kept noticing out of the corner of my eye a woman that looked terribly familiar - yes you know where this is going and no, I will not cut this short. I was busy gobbling up some spaghetti bolognaise. Do you know how long it is since I had a basic spags bol? Too long. So there I was sucking up stray spaghetti and thinking I swear if that woman was a bit older I would say she was Sonia. I kept sneaking looks at her and thought “Oh my god she must think I am some sort of weird stalker.” Then I thought “Well you know maybe it could be Sonia maybe she aged very well????? You never know???????” I told Bryan. He gave me the look he gives me when I am recognizing perfect strangers as people I knew a million years ago. I cannot let things like this go. The worst that can happen is that I get a withering “you are a weirdo look “and that is that. So I round on the poor woman and say “Are you Sonia Sime?” And she says “Yes! Are you Penny Panas?” YAY I found an old school class mate! She was at the Lit. Fest,with her two lovely children, to see some of the authors. Us Zimbos are just the most enthusiastic readers! Now I do not know how many of you are part of the “scattered to the four corners of the Earth band of people” but  if you are there can’t be many of you who can say, as I can, that I have, from  my Mabelreign  Girls High form1A2  three  class members in Dubai. I am not talking same year, or same school I am talking SAME bloody CLASS. Pretty awesome don’t you think? Note to self -arrange a class reunion in Dubai. And Sonia has aged very well. Or I have not. But we don’t need to go there right now do we?  I think I need to book a facial. We have exchanged numbers. 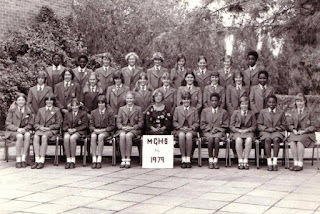 Back to the festival I volunteered my ass off on Friday and Saturday. I was an assistant Room Manager working with a lovely team of other volunteers and backed up by the amazing Production team and Literary Festival office staff. As always my feet took the brunt of the constant up and down and running about that the role entailed. I swear the Princess and the Pea is nothing on me and my delicate feet. I was born to be carried not to walk. I am sure of this or rather my feet are. At one point on Friday I just knew that my feet were going to leave me. They really had, had enough and they make no effort whatsoever to buck up. It is frustrating and I cannot seem to get them to work with me. Ah well.

On the grown up circuit I listened in on  Eugene Rogan (who was part of the session I had enjoyed on the previously mentioned English Language Hero or Villain discussion) talking about his book “The Arabs – A history”.  This was followed by  Tony Buzan of Mind Mapping fame presenting “Maps, Minds and unlocking Creativity”. To be honest not really my thing but his presentation was enormously popular on both days that I was involved with him. The hardest thing was finding enough colored felt tip markers for 450 odd people…… I am so glad that I got to sit in on a discussion between Shobhaa De and Anupam Kher ( who you may remember  him from Bend it like Beckham more recently Silver Linings Playbook) talking about Celebrity and Success. Bottom line. Shobhaa  De( author and journalist) finds celebrity a delicate balance and Anupam Kher loves it and embraces it. And of course best for me was listening to Ben Okri read his poetry. He was very Zen and collected. I could not resist asking him if he was familiar with  the late Dambudzo Marechera's work. He was!

I volunteered on a few prize giving events covering poetry writing, reading champs and a writing competition. It was pretty cool to listen to Arabic poetry being read. Given that I don’t understand Arabic it sounds so lyrical and expressive.

In all a very well rounded experience for me. I skipped about for a few days wearing (thankfully) flattering black with a name badge smiling as if my life depended on it and fell flat on my back into bed late on Saturday night. I lived on snatched up biscuits and sips of water with a notable lapse of good judgment on Friday. Should I tell you…… What the hell. Here we go.


So on Friday I was room managing a dinner event. Best thing to do as the “production” side was being handled very ably by Royal Shakespeare Company director Philip Breens and the event was attended by most of the Lit Fest Office. So really all I had to do was make sure that the table clothes hung properly and the decorations looked good. I was somewhat flagging around 10.30pm as really things were going well and there was not much for me to do. I think the Lit Fest peeps took pity on me and said go home. Which, I should have done. …But no, I did not, did I.

Bryan was next door at the Belgian Beer Cafe having met up with some of his Theater buddies. So I joined them. Now, I had not consumed much in the way of food or drink all day. A beer was put in front of me. A promise of “don’t worry we have ordered mussels, they will arrive just now” had me throwing back the beer. Well the rest, as they say is history and predictable. I woke up very late on Saturday in a panic of “Oh my giddy Aunt, I have to get to the Lit fest NOW” Bryan ( he had work stuff to do) and I   were tearing about the house in a panic with no time to think of small things like the hammering in our heads and the fact that Bryan did not have his wallet. In short order I realized that my head was very sore and Bryan released that he had lost his wallet……

All’s well that ends well. I took some pain killers and loved Saturday and Bryan got a call from the taxi company (we love you RTA) to say that the taxi cleaner had found Bryan’s wallet on the floor of the taxi.

PS There were fire works.Yay. Don't know if they had anything to do with the  Lit Fest or  was something else that was going on at Festival City. But it was a treat.

PPS Also got to see the Festival City Mall Light and Water Show.

I love the bling.

Oh, I am SO SO SO jealous that you got to meet Edward Gorey.
Will bring you some bling of your own. South India abounds with the stuff, to the point that there is never a grey day.